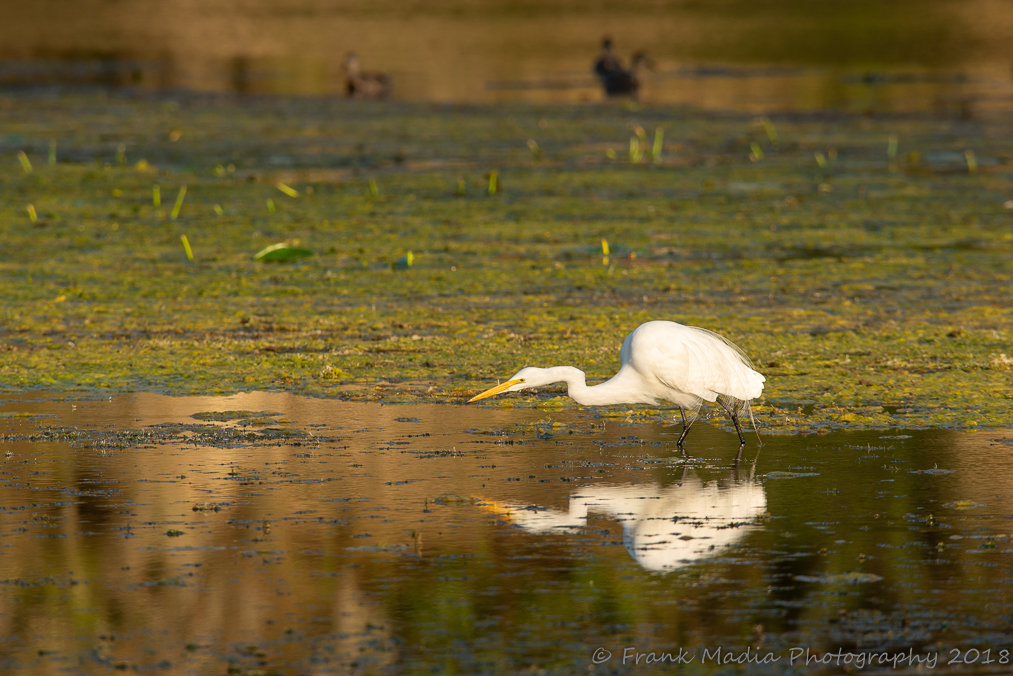 Aquarena Springs is located on the campus of Texas State University in San Marcos, Texas.  The springs constitute one of the largest outflows of the Edwards Aquifer.  There are over 200 springs making up the complex.  Today the springs lie at the bottom of Spring Lake.  The lake empties into the 3.8 mile long San Marcos River which makes its way to the Blanco River.

Historically, archeologists believe the area around the Springs is one of the oldest continually inhabited site in North America. Sediment cores indicate that humans lived here 11,500 years ago, and there is evidence the area has been occupied during every known period of human habitation in Central Texas. In historical times, the Cantona Indians called the Springs Canocanayesatetlo, meaning “warm water”.  Another Indian term for the area was Canaquedista, meaning “headwaters”.

My purpose for visiting the springs was to find and photograph large wading birds.  Spring Lake has a wonderful boardwalk that skirts the northern shoreline of the lake thereby providing unrestricted views of the lake and its inhabitants and visitors.

This was my first photographic outing since Connie and I returned from our winter trip to Yellowstone National Park.  I was getting a little antsy for a photography fix.  I left home before sunrise, a rarity for me.  By the time I arrived at the springs and gathered my gear the sun was just high enough in the sky to provide some wonderfully warm lighting.  As I made my way to the boardwalk I could hear a lot of activity on and around the lake.  There were several warblers working the trees and bushes at the lake’s edge.  I spotted over 50 Black Vultures roosted in the trees on the far side of the lake.  Many were so well hidden I had to look for movement in order to see them.

There was but one Great Egret working the shallows of Spring Lake looking for some breakfast.  This beautiful bird was not really in the mood for a photographer this early in its day.  As I slowly made a turn on the boardwalk that put me in the open, the bird took flight and moved further offshore.  I tried to not be disappointed and set up for some long shots.

I am not a fan of cropping.  There are too many things that can go wrong while cropping.  For instance, any noise or grain that may exist in the image will be magnified.  I was fortunate with this shoot that the light was so good I was able to shoot at a low ISO thereby minimizing the grain.  My school of thought has always been to use a longer lens or get closer to the subject.  I am not in any danger of getting any longer lenses and I would have needed waders and waterproof gear to get closer in this instance.  There would have likely been a fine involved as well.  The original image shows the bird as a much smaller less detailed creature.

Over time, the bird became a little more tolerant of my presence and began working its way closer to me.  That was somewhat short-lived, as a volunteer who was doing his due diligence in making sure there was no trash in the lake along the boardwalk appeared with a bucket and a long-handled net.  The bird moved away again.  I spent several minutes chatting with the volunteer who seemed to have a pretty good idea of what birds frequent the lake.  He did not, however, understand that quiet and slow movement are two necessary components to getting closeup photographs of birds.

As I slowly worked my way around the boardwalk, the Great Egret began giving me far more interesting looks.  Unfortunately, those looks kept getting further and further away.

There was only one other bird that was close enough for a decent shot.  It was a Lesser Yellowlegs.  This image is also cropped so you can actually see the bird.

I contemplated waiting around for more activity, but in the end, decided it just wasn’t in the cards for this day.  On my way back to the car I did find a few interesting and more obliging subjects.

While this was not the best outing for photography, it was none the less a wonderful start to my day.  I thoroughly enjoyed being out in nature and observing natural things.  As a bonus, I got in some great practice with my camera and learned more about the art of photography.  It was a wonderful few hours.

11 thoughts on “An Early Morning Visit to Aquarena Springs”