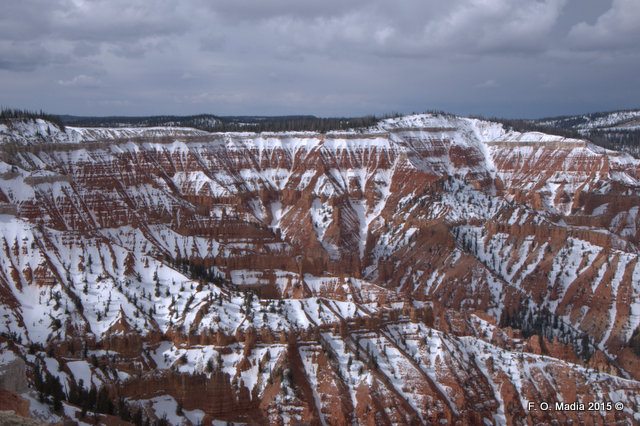 I am a little ashamed to admit that three weeks into June I am still trying to get our May travels documented. However, in my defense, we have been very busy and have had very little time to do much of anything with computers except the occasional catching up on e-mail and paying bills. Of course I have been adding photographs to the computer as they are made. Finding time to write has been a real challenge. I may have to give up on sleep in order to catch up.
That said, let’s get with it. More from Utah is the theme for this post. As mentioned in my last post we spent several days in Utah staying in different locations while visiting many attractions, most of which were National or State Parks. During the second touring day from our Panguitch base camp we went to Zion National Park.
For anyone who has visited Zion, you are likely familiar with the South Entrance outside of Rockville, Utah. This is the sort of normal entrance that most people access the park.

You can drive as far as the visitor center where you have to board a bus to travel further into the interior of the park. We had done that tour several years ago while stationed in San Diego, California. We therefore decided we would see other areas of the park that can be accessed via private vehicle. That said, we headed to the East Entrance. Our route from Panguitch took us south on US 89 to Mt. Carmel Junction where we then went west on Utah 9. Along the way there were several overlooks that provided a preview of sorts as to what was ahead. These first few photographs came from outside the park looking towards and into it.

As we approached the entrance station we knew we were in for some exquisite views. The first 3 or 4 miles of the drive from the East Entrance into the park (before the tunnel) provided some of the most unique formations I have ever seen.

Zion’s natural history is as complicated as any of the other geological wonders in this part of Utah. The area was once the floor of a shallow sea, a broad tidal flat, the delta of a great river and network of streams lakes. Distant volcanoes erupted leaving ash to form bright layers. More than 180 million years ago, a great desert of windblown sand covered a huge area of what is now the western United States, including Zion. The sand provided the raw material for the Navajo Sandstone, which composes cliffs some 2,000 feet high in Zion Canyon. The next stage in the creation of Zion was the long, slow uplift of the Colorado Plateau, which raised the entire region many thousands of feet. Streams running off the plateau, such as the rapidly flowing and occasionally flooding Virgin River with its load of sand, pebbles and sometimes boulders carved the canyon over the last several million years. The river’s job of sculpting the canyon is made easier by the nature of sandstone, which consists of grains of quartz sand that are held together with weak “cement.” Also contributing to the erosion process are numerous cracks in the sandstone, called joints. These joints form channels through which water can run.

The East Entrance Road eventually turns south at Canyon Junction. Just south of the junction is the visitor center and the bus stop where visitors can jump on the shuttle to go north into the park. Since the weather was not looking so great, we decided to eat our lunch in the car then exit the park to the south and continue to the west and take the Kolob Terrace Road back to the northeast reentering the park along the southwest border. While there were some pretty neat things to look at, there were no real photo opportunities due to bad skies and light. The road was closed a few miles from where you re-enter the park, so we had to turn around a little sooner than we had hoped.
We backtracked down Kolob Terrace Road then continued west on Utah 9 La Verkin where we turned north and continued to Kolob Canyons Road where we once again re-entered the park. Kolob Canyons Road took us to the east and then to the south. We got a little break in the weather and were able to make some pretty neat photographs.

The earliest evidence of human occupation in and around Zion comes from a time known as the Archaic Period, whose scarce remnants have been dated to about 7000 B. C. Over the years, farming began in the region and the people began to live in larger groups. These people are called the Ancestral Puebloans. They grew corn and squash and stored their surplus crops in granaries. They lived in and around Zion along with their neighbors to the north, the Fremonts, until about A.D. 1300.
Named by early Mormon settlers for the sanctuary and refuge it provided, Zion features massive stone formations and red cliff faces that have elicited feelings of reverence for many. The names given by settlers and visitors to prominent such as Angels Landing, the Great White Throne, Altar of Sacrifice, the West Temple and the Three Patriarchs: Abraham, Isaac and Jacob reflect the reverence these early Americans must have felt.
Author’s note. Most of the historical information above came from the American Park Network publication Oh, Ranger. Additional and more detailed information about Zion National Park and its history can be found at: http://www.nps.gov/zion/learn/index.htm
Once out of the park for the final time we headed north on I – 15 to Cedar City, Utah where we had dinner at Don Miguel Mexican Restaurant. Connie had researched the restaurants in the area via Trip Advisor and had learned that Don Miguel had a really good reputation with many five star reviews. We were not disappointed with our decision to eat at this wonderful little restaurant. I highly recommend Don Miguel’s to anyone traveling through the area.
Our drive back to Panguitch was through a driving rain and not a whole lot of fun. As we approached Panguitch the rain subsided some and we were able to stay dry while moving from the car to the motorhome.
Our next stops were Kodachrome State Park and beyond. Stay tuned. I will try to get the next few stops out sooner than these last few.

4 thoughts on “More From Utah”