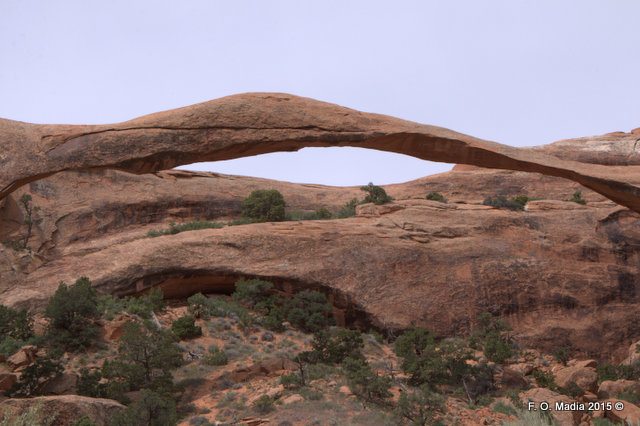 Our Final Days in Utah

Our final days in Utah started with our last remaining day of travel from our Panguitch base, so we tried to make the most of the day.  Our first stop of the day was to Kodachrome Basin State Park.  The park is nine miles south of Utah 12 east of Bryce Canyon National Park. The drive to Kodachrome was pretty fantastic in and of itself.  We stopped along the way to get a few pictures of the sandstone formations while the light was good and the skies although partly cloudy were a brilliant blue.  Here are a few of my favorite images. 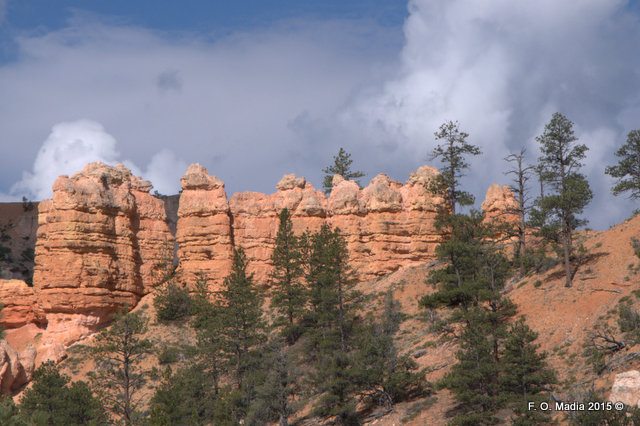 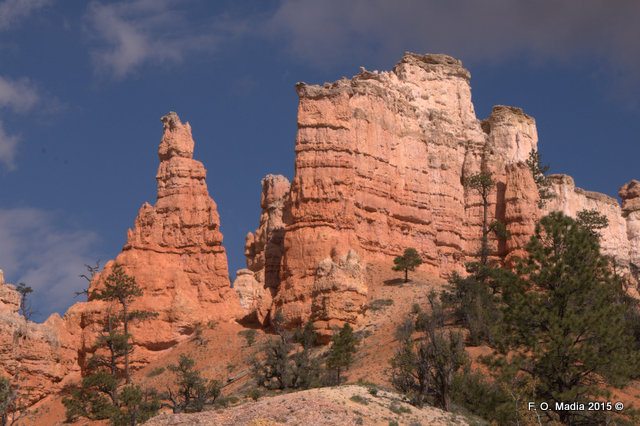 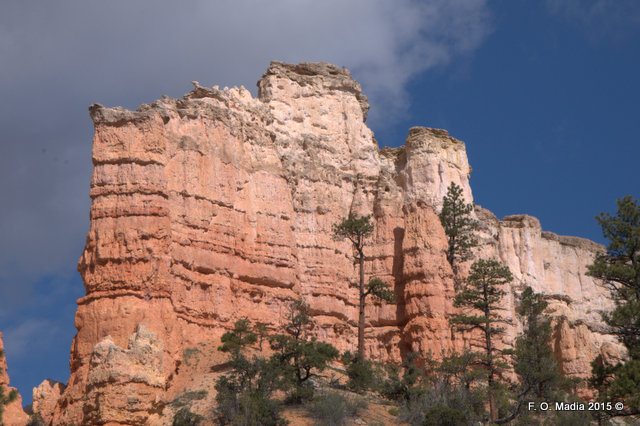 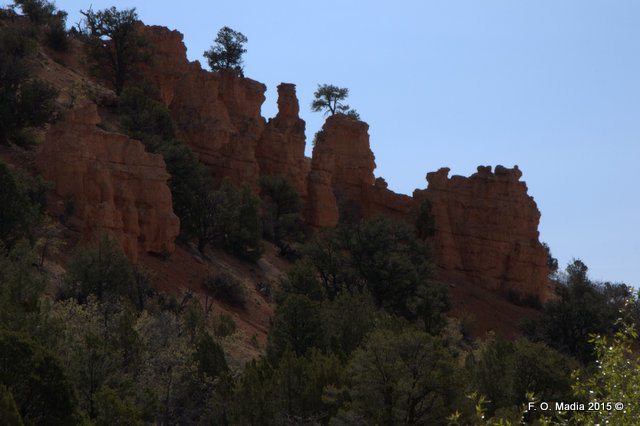 Back to Kodachrome Basin State Park.

“The basin is a spectacle of towering sandstone chimneys, changing in color and shadow with the day’s mood from red-tinged spires against a blue sky, to soft evening light settling over the desert. This color and contrast prompted the National Geographic Society in 1949, with consent from Kodak Film Corporation, to name the park Kodachrome.

There are nearly 70 monolithic spires, ranging from six to 170 feet in height, jut up from the valley floor or protrude from the sandstone.”

The geology and geologic history of Kodachrome is similar to that of the rest of the Colorado Plateau in Utah. The most distinctive features in the park are the large columns of sedimentary rock that rise from the basin floor. These are known as sedimentary pipes. Geologists are unsure of the exact origin of the pipes, but several theories have been proposed that might explain their formation.

“Evidence recorded in the rock layers within the park indicates this area was seismically active throughout most of its geologic history. Earthquakes may have provided the force necessary to cause coarse, water-saturated sediments to scour pathways through the overlying rock layers. These pathways became filled with the coarse sediment and eventually re-cemented and became harder than the surrounding rock. Over time, erosion has removed the softer layers, revealing the pipes.

A second theory explains the pipes as the remnants of ancient springs. The springs became choked with sediments, which eventually cemented together and became more erosion-resistant than the surrounding rock. The softer rock layers were eventually worn away by erosion, exposing the sedimentary pipes.

Recently, a new theory proposes that the pipes were formed from water-saturated pockets buried under layers of other sediments over a period of several million years. Pressure from the overlying sediments forced the wet slurry upwards. The rising slurry scoured pathways through the overlying rock, eventually cementing into hard rock. Erosion stripped away the softer rock layers revealing the landscape you see today.

No matter how they were formed, the pipes provide a landscape that is truly unique to Kodachrome Basin.”

The quoted text above came from the Kodachrome Basin State Park newspaper.
We had some less than delightful weather during our last few days in the area. We hoped that the move to the Arches National Park area would bring with it better weather. While we did have several good hours of good, there were also many hours of overcast and dreary skies. 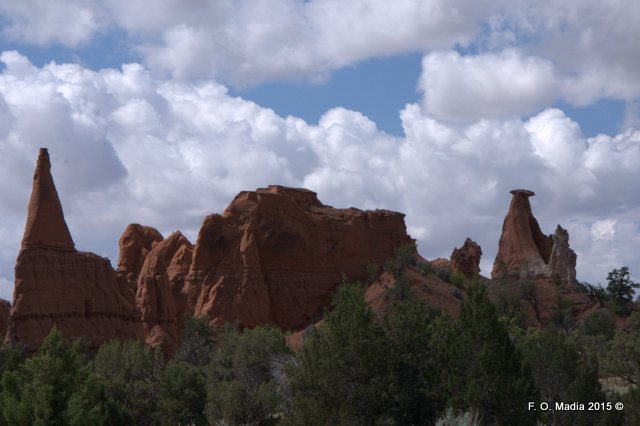 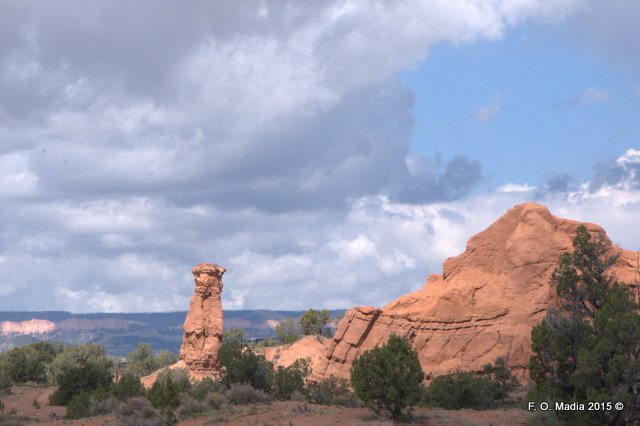 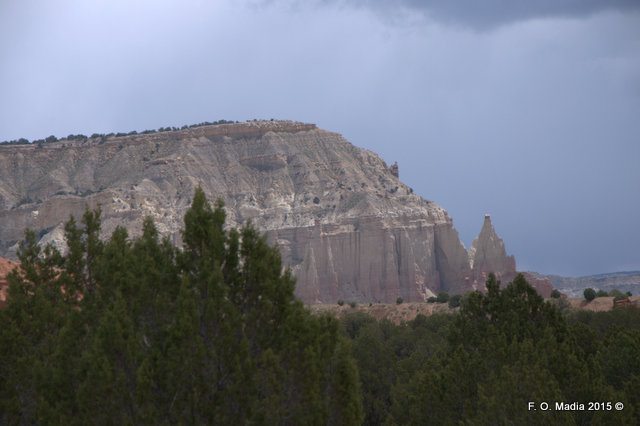 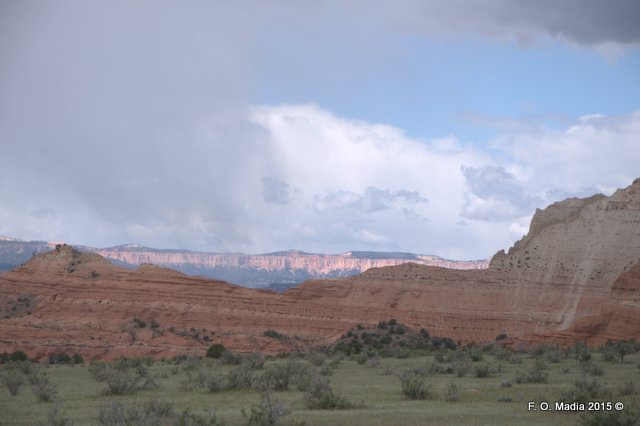 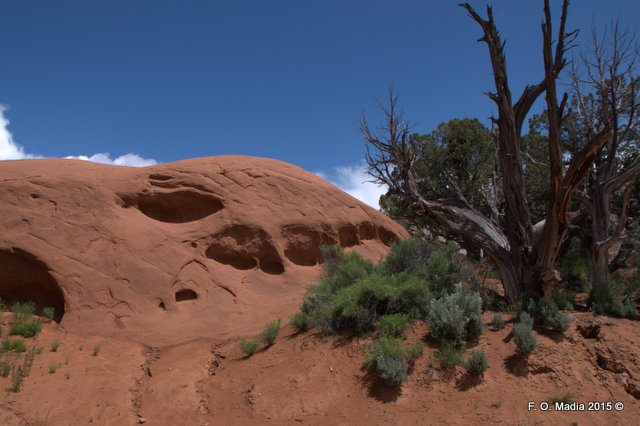 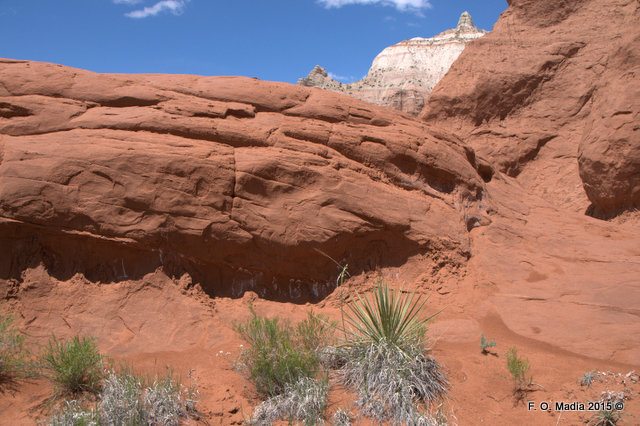 We spent a wet few hours at Dinosaur National Monument.  While this is an incredibly neat place, I took no photographs.  There will be more about that in a future post.  The truly impressive thing about Dinosaur National Monument is the quarry.  Visitors ride a trolley to the quarry where the National Park Service has constructed a building around the site.  This two story structure lets one get right up next to the exposed petrified bones of hundreds of dinosaurs.  It is thought that many bodies and skeletons were caught up in fast moving floodwaters and eventually came to rest where most remain today.  Then over the years many feet of sediment covered over the bones and the natural processes occurred resulting in petrified bones literally on top of one another.

In my opinion the quarry is the highlight of this 210,000 acre monument.  That said, there are many features other than the bones to see.

We hope to return to Dinosaur National Monument at some time in the future and when the weather is more favorable to taking in all the sites and sounds of this wonderful place.

Our next stop on the Utah tour was Arches National Park.

Arches National Park contains the largest concentration of natural stone arches in the world – more than 2,000 at last count.  Yet, what is an arch?  Is it the same as a bridge?  How about a window?  If you’ve asked these questions, you’re in good company.

Arches National Park while still part of the Colorado Plateau has yet another twist to the geology that makes it unique among this vast area of wonder.

“To qualify as an official stone “arch,” a hole must have an opening at least three feet long in any one direction.  There is no requirement for width, though; quite a lot of the arches in the park are so skinny you have to place your cheek up against the rock in order to see any light through them.

A natural bridge is formed by running water and spans either a present or former waterway.  Very few natural bridges exist at Arches, but Natural Bridges National Monument, just two hours south (112 miles), has three tremendous examples of this feature.  All of them are visible from their paved scenic road or by hiking trail.

Is a window a special kind of arch?  Not really.  “Window” is just a descriptive term that is often given to rock openings high on a rock wall or fin. Some arches are called windows if they “frame” a particularly good view of the landscape beyond.

Arch, bridge, window, hoodoo, spire, tower… these are all descriptive names given to sandstone features visible in the park and elsewhere in the southwest.  Whatever you call them, shapes in the rock possess great power to capture the human imagination.”

So, how were these arches and other geological features formed and what makes this part of the Colorado Plateau different from even the park’s surrounding area?

The quoted text above came from the Arches Visitor Guide.

“The park lies atop an underground salt bed that is responsible for the arches, spires, balanced rocks, sandstone fins, and eroded monoliths of this mecca for sightseers.  Thousands of feet thick in places, this salt bed was deposited across the Colorado Plateau 300 million years ago when a sea flowed into the region and eventually evaporated.  Over millions of years, residue from floods, winds, and the oceans that came and went blanketed the salt bed.  The debris was compressed as rock, at one time possibly a mile thick.

Salt under pressure is unstable, and the salt bed lying below Arches was no match for the weight of this thick cover of rock.  The salt layer shifted, buckled, liquefied, and repositioned itself, thrusting the rock layers upward as domes, and whole sections fell into the cavities.

Faults deep in the Earth made the surface even more unstable.  You see the result of one 2,500-foot displacement, the Moab Fault, from the visitor center.  Fault-caused vertical cracks later contributed to the development of arches.  As the salt’s subsurface shifting shaped the Earth, surface erosion stripped off younger rock layers.

Except for isolated remnants, today’s major formations are salmon-colored Entrada Sandstone, in which most arches form, and buff-colored Navajo Sandstone.  They stand like a layer cake over most of the park. Over time water seeped into superficial cracks, joints, and folds.  Ice formed in the fissures, expanding and pressuring the rock, breaking off bits and pieces.  Wind later cleaned out the loose particles, leaving a series of free-standing fins.  Wind and water then attacked these fins until the cementing material in some gave way and chunks of rock tumbled out.  Many of these damaged fins collapse.  Other, hard enough and balanced, survived despite missing sections.  These became the famous arches.  Pothole arches are formed by chemical weathering as water collects in natural depressions and then eventually cuts through to the layer below.  This is the geologic story of Arches National Park-probably.  The evidence is largely circumstantial.”

The quoted text above came from the official Arches National Park map. 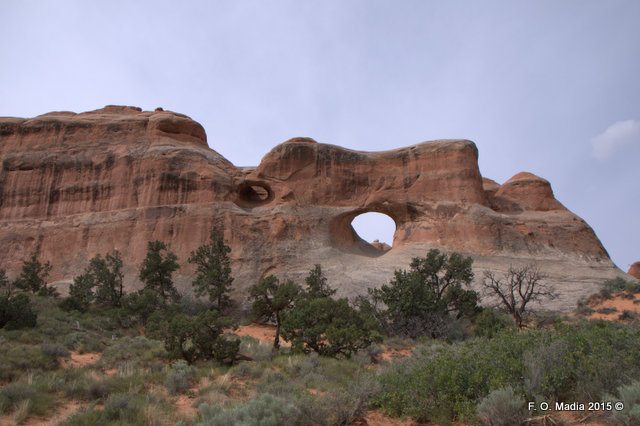 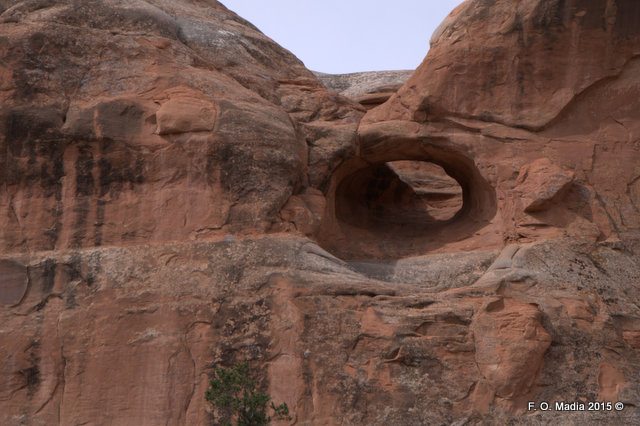 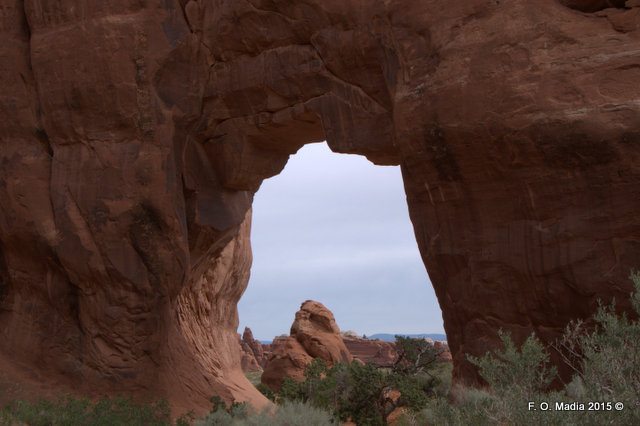 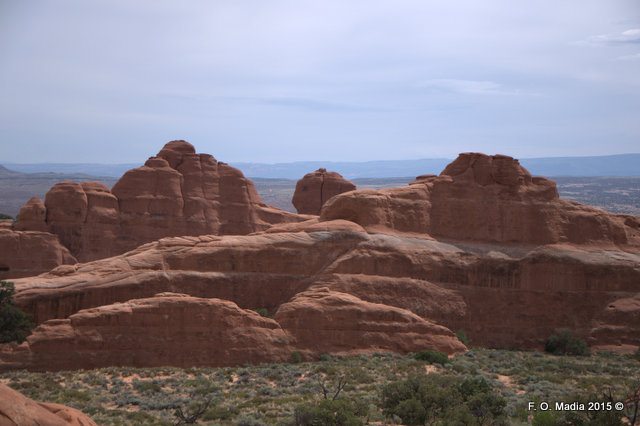 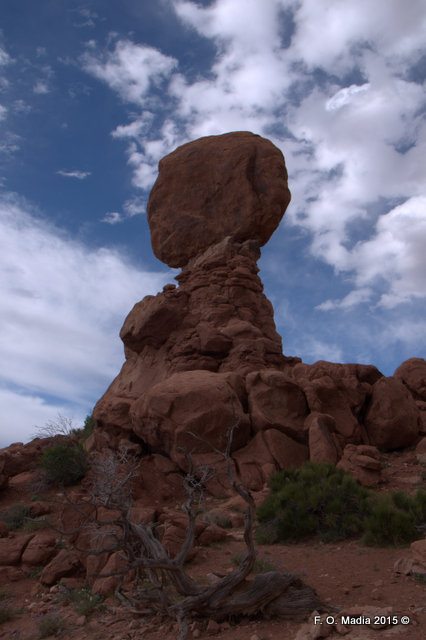 Not far from Arches National Park is Canyonlands National Park. While there are only several miles separating the two parks there is a good bit of difference in the geology.

“The park preserves 337,598 acres of colorful canyons, mesas, buttes, fins, arches and spires in the heart of southeast Utah’s high desert.  Water and gravity have been the prime architects of this land, sculpting layers of sedimentary rock into the rugged landscape seen today.  The park is divided into four districts by the Green and Colorado rivers: the Island in the Sky, the Maze, the Needles, and the rivers themselves. While the districts share a primitive desert atmosphere, each retains its own character and offers different opportunities for exploration and adventure.

There are no roads within the park that directly link the districts.  They may appear close on a map, but traveling between them requires two to six hours by car as there are few places to cross the Colorado and Green rivers.  Most people find it impractical to visit more than one or two districts in a single trip.”

The quoted text above comes from the Canyonlands Visitor Guide.

Our visit to Canyonlands was much shorter than is required to do the park justice.  There are miles and miles of trails to hike as well as taking in the views from the rim of the canyon.  Our visit included only a driving tour of the rim with a few short hikes along the edge of the rim.  Again, we will have to go back. 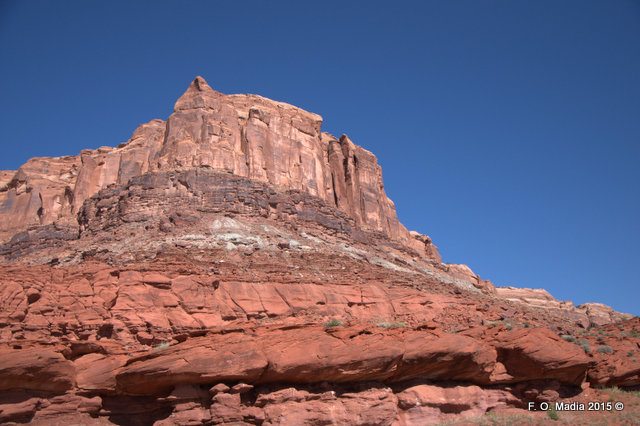 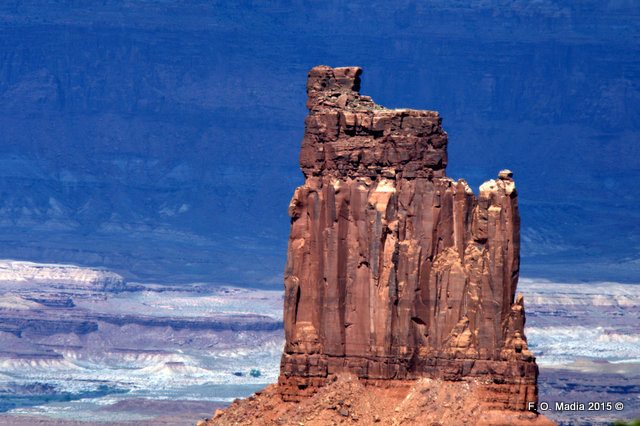 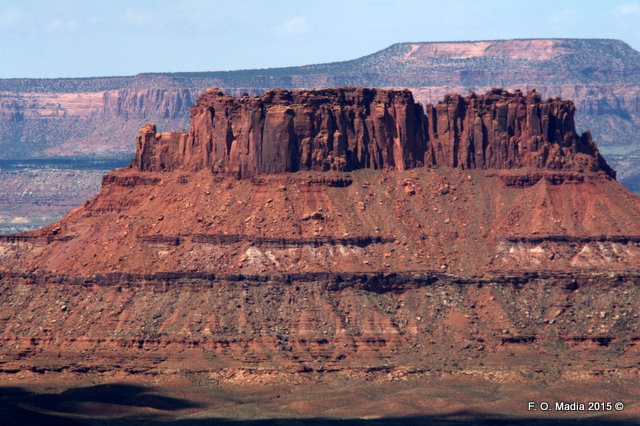 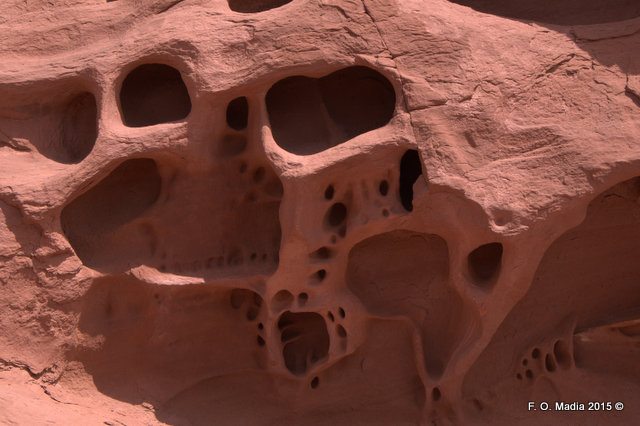 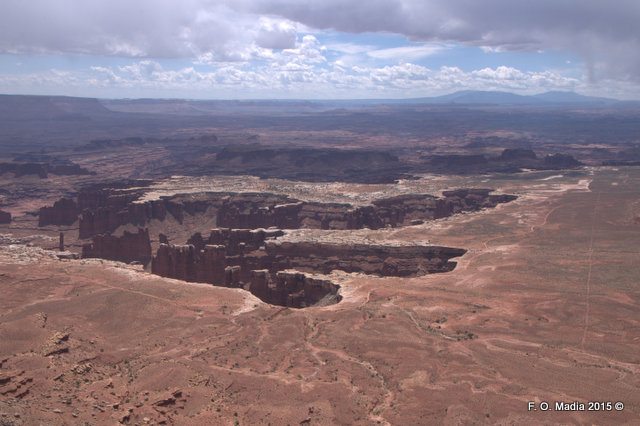 By this time we were getting a little tired of looking at red sandstone.  We had been on the Colorado Plateau for a week at this point.  Were it not for my notes and photo cataloging system I would have had trouble remembering where many of these images were made.  I for one, was ready for a change in the color of the rock if nothing else.  That said, I have to go back and do more hiking in this wonderland of geology.

From here we changed course to the north making our way into southwestern Wyoming.  Stay tuned for the highlights from our Wyoming travels.

5 thoughts on “Our Final Days in Utah”