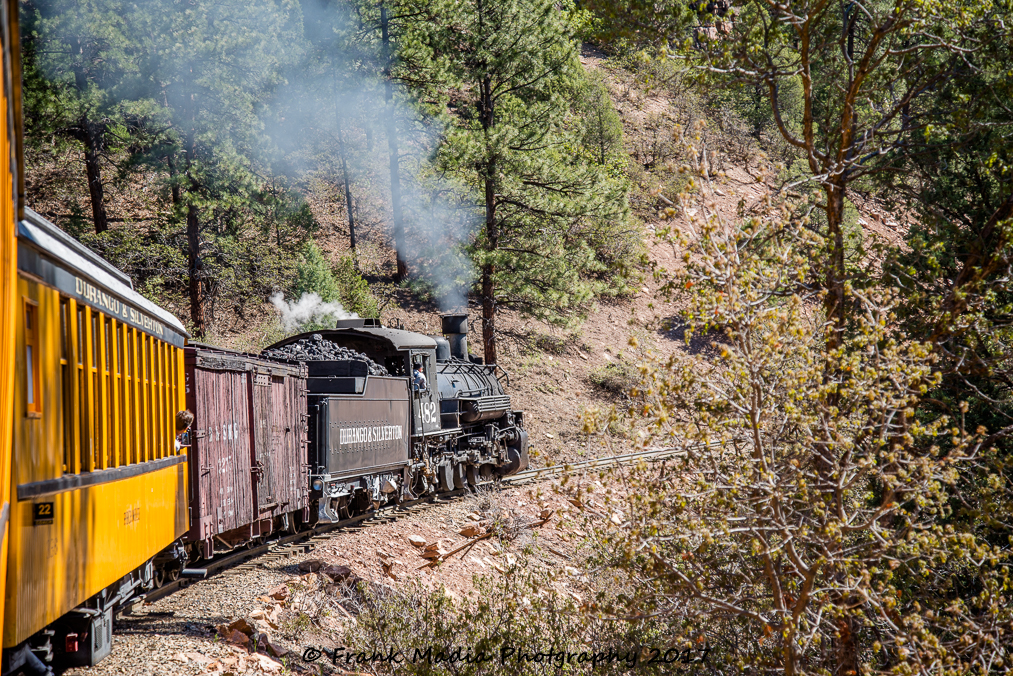 Spring 2017 Part 2 picks up where Spring 2017 Part 1 left off with us camped at our temporary home base in Farmington, New Mexico. We had one more bucket list item to take care of before continuing north towards Yellowstone National Park. For years we had talked about taking the train from Durango to Silverton, Colorado. Of course, the Durango & Silverton Narrow Gauge Railroad was the way to get there. We also wanted to revisit the Dinosaur National Monument which straddles the Utah, Colorado border to the north. We would necessarily need to change bases to accomplish the latter.

The drive from Farmington to Durango covered much of the same route as we had taken to get to Mesa Verde National Park the day before. So, to ensure we wouldn’t arrive too late we decided that on our way back to Farmington from Mesa Verde we would extend our day with a side trip to Durango leaving us a straight shot back to Farmington on the exact route we would be taking in the early hours of the following day. This excursion gave us the opportunity to check out where we would be parking and where and what we would likely be eating for breakfast. We also looked around a bit to see where we might want to eat dinner following our return from Silverton. Once we were satisfied we would not get lost or confused we headed back to Farmington and a relaxing dinner after a full day of sightseeing.

The next morning, we were up and on the road much earlier than usual because we had a bit over an hour’s drive to get to Durango and being late was not an option. On our reconnaissance trip,  we learned there was some road construction along our route and we certainly didn’t want that to play a role in our shared stress level. As it turned out, arrived with plenty of time to park the car and stop in at the local Starbucks for a light breakfast. After breakfast and a bit of relaxation, we walked to the train station and picked up our tickets before a brief walkthrough of the gift shop and museum. We were actually early!

Our early arrival gave me an opportunity to make a few images of the station and the train on which we would spend most of the rest of the day.

Durango, Colorado was founded by the Denver & Rio Grande Railway in 1879. The railroad arrived in Durango on August 5, 1881, and construction on the line to Silverton began in the fall of the same year. By July of 1882, the tracks to Silverton were completed, and the train began hauling both freight and passengers.

The line was constructed to haul silver and gold ore from the San Juan Mountains, but passengers soon realized it was the view that was truly precious.

The train has been in continuous operation between Durango and Silverton since 1882. Today, the train utilizes vintage coal-fired steam locomotives and rolling stock indigenous to the line.
Most importantly, much of the line travels through areas that are inaccessible by a highway.

The easiest way to complete this story is through the images I was able to capture along the way and while in Silverton. I hope you enjoy the trip.

If you enjoyed this virtual journey and find yourself wanting to make the real trip, here is a link to the Durango & Silverton Narrow Gauge Railroad. http://www.durangotrain.com/

The train trip exhausted both of us, primarily from sensory overload. We had to stay alert as the next bend in the track, the next bird that flew over or the changing clouds made for a very busy day of constant looking.

Our plan had been to have dinner in Durango but realizing that we were already exhausted and had an hour’s drive ahead of us dictated that dinner would have to wait until we returned to Farmington. This wise decision was none-the-less disappointing as we had spotted some really fun looking places to eat in Durango. Safety first!

Back on the Road

The following morning, we were on our way north with Dinosaur National Monument in our sights. The logistics got a bit complicated for a few days at this point in our journey. We wanted to visit a friend who lives in Meeker, Colorado. There were a couple of problems with our on the fly planning.  First, we had yet to make contact with our friend to see if we would be able to meet somewhere.  Second, the drive between Farmington and Meeker presented a challenge, not so much for the miles, but for the mountains.  We broke the drive into two much shorter days, which was nice for me.  We finally contacted our friend on the second day only to learn that she would not be in town.  With that knowledge, we gave some thought to skipping the Meeker area altogether and continuing on to Jensen, Utah where we would base camp for our visit to the monument.  Those additional miles seemed to be more than I wanted to drive in a day, so we kept the Meeker area stop in the agenda staying at River Camp RV park on the White River just outside of Meeker.  The RV park was about as peaceful as you could ask for and we spent most of the afternoon wandering along the bank of the river doing a little bird watching and just enjoying not being on the road.  We did venture into Meeker where we found a wonderful Italian restaurant that made the day complete.

The last time we visited Dinosaur National Monument, I was unprepared for what we would see and by having to ride a bus to the Quarry Exhibit Hall, I incorrectly decided to leave my camera in the car. After being absolutely awestruck by what there was to see in the exhibit hall I was determined to return.

That first visit was on a cold rainy day, a fact that contributed to my decision to go without my camera. The weather for our return visit this year wasn’t much better. While it wasn’t raining this time, the sky was cloudy, the wind was blowing, and it was chilly.

The Quarry Exhibit Hall at Dinosaur National Monument offers some photography challenges, to say the least. During our visit we had everything from fluorescent, tungsten, cloud-filtered sunlight, bright sunlight, to possibly mercury vapor light to account for while making images. In many of the images I made, there were multiple light sources of a wide spectrum of temperatures. Of course, what I saw through the viewfinder would not necessarily be the same as what I would eventually see on the computer. A good off the camera flash would probably make the mixed lighting a moot point, but I neither had one along nor thought it appropriate to be using one while other people were trying to enjoy the exhibit.

I share the fact of these challenging issues as a prelude to what you are about to see. Once I had moved the images from this shoot into Lightroom, I knew I was going to have to make adjustments that would be outside my expertise level and my personal comfort level with regards to my long-standing philosophy regarding computer manipulation of images not gotten correct in the camera. Following a good deal of soul-searching as well as a review of which sliders in Lightroom I needed to use to bring life into the images, I decided that my philosophical stand had not been violated as I was doing what I had learned to do while processing film in the darkroom many years ago.

That said, in the images you are about to view, you will likely notice that there is a range of color that seems inconsistent from one image to another. The simple explanation is the color shift follows the change of dominant light source for the specific location where I was standing while making the image.

The images taken from the entrance end had a lot of sunlight, some filtered, some more direct along with spotlights that were likely tungsten. In the middle, there was a lot of fluorescent lighting and some tungsten spotlights competing with the small amount of natural lighting from windows to the top back of the exhibit. As we moved towards the exit end of the hall, there was more natural light dominating, but always in competition with the fluorescent and tungsten lights within the hall.

My color adjustments were made to bring out the details that one can see while standing in front of the exhibit. I was not trying to trick anyone into seeing something that is not there for all to see. Ethically, this is an important distinction for me as I am frequently asked how much “photoshopping” I do to my images. My response is never a simple “none” because that could be misleading because even though I don’t own a copy of PhotoShop, I do make color corrections to my images in order to present to the viewer what I was able to see with my eyes at the time I made the photograph. I do not try to adjust my images to make them look like what I would have liked to have seen with my eyes at the time the shutter was triggered. I hope this makes sense, as it is important to me in the presentation of my art.

One final thought. There have been at least one or two occasions that I have really manipulated an image for this blog simply because I did not have an image I was comfortable sharing that was needed for the story I was telling. In all those instances I have been clear that the image was grossly adjusted. Those images would never find their way to the Portfolio page of this website.
I will now let the photographs complete this story. Enjoy them and the incredible story they illustrate.

A Bit of Housekeeping

In my last post, Spring of 2017 Part 1, I had some photos that were incompletely identified or just unidentified. One of my faithful readers refocused my memory by providing the location for the images which has allowed me to recover the information needed to complete the picture, so to speak.

While I have edited that post with the additional information, I don’t expect anyone to go back to try to see what I added or changed. So, here are the images and as Paul Harvey so famously said, “… and that is the rest of the story.”

We then made a beeline of sorts, to Yellowstone National Park. In Spring of 2017 Part 3, I will recount those last days on the road and the first week in Yellowstone before our volunteer job began. Stay tuned.