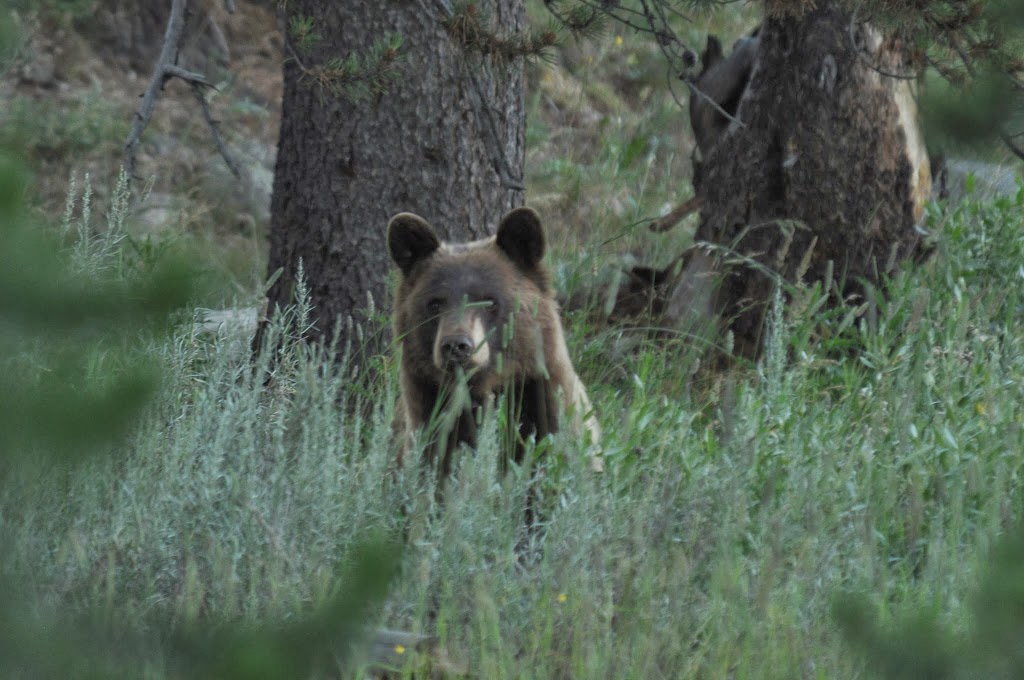 I know I have gone a long while without a post.  There are a lot of reasons for that, none of which are important.  In this post I am testing a new format and trying a few things that will hopefully make posting easier and faster.

In my last post I talked about the cinnamon colored black bear who hangs around near Indian Creek Campground with her two cubs.  I was finally fortunate enough to get some reasonable photos of the family.

This is Mom.  At this point she had the little ones up in trees while she was searching for food by tearing open logs.

This is one of the cubs keeping an eye on things.  Eventually mom called them down so they could move on to another area.  When they got down and started heading towards the campground I had to shift back into the work mode and start hazing them in a different direction.  One of the cubs got scared or confused and went up another tree only to be chastised by his mother.  When he came down from the tree he was in a big hurry to get to mom’s side.

“I’m almost there.  Where are we going from here?  Did you hear that man yelling at me?  It scared me!!”

I took these photos in pretty low light.  It was impossible to get the running cub in perfect focus.  However, when I reviewed the images I felt that the blur helped tell the story.  I hope you think so as well.

Connie and I moved to Mammoth Campground along with our partners Rick and Donna after we closed Indian Creek Campground.  We worked at Mammoth with Russ and Susan, so we still enjoyed the two on four off rotation which allowed for us to do a lot of in the park travel as well as a side trip to the Grand Tetons and Jackson, Wyoming.

This photo was taken just south of Jackson Lake Lodge.  There must have been a bus load of people there taking the same picture.  I was able to keep the crowd out of my image.  The sharp peak on the left is Grand Teton and the rather flat topped peak to the far right with the glacier dissecting is Mt. Moran.

This is a shot of Grand Teton taken from alongside the road at Moran Junction.  This is one of those iconic shots captured by virtually all mountain photographers.  I have a long story about Moran Junction and the Heart Six Ranch.  You should ask me about it some time.

This photo was taken at The Oxbow Bend of the Snake River just below Jackson Lake Dam.  The day was absolutely perfect with essentially no breeze thereby affording such a sharp reflection.  If there was a bus load of people at that first stop, then there were three bus loads here.  It took a good bit of patience to capture this image without people.  There must be a shoreline trail or path on the west side of the the oxbow, because for a long while there were people walking into the frame from the right side.

While we were visiting the Tetons and the Jackson Hole area, Connie and I stayed at the Heart Six Guest Ranch.  For those of you who have known me from my youth you will recall I used to work at the Heart Six in the summer.

This is an image of the living room area of the lodge.  I helped build this addition to the lodge in the second summer I worked on the ranch.  I peeled the bark off most of the logs that make up this over sized room and I helped pick out, load onto a truck, transport, unload and install the granite stones that make up the fireplace.  That was quite a lot of work, but work well worth the effort.

I know this image looks a bit off.  I was in a hurry and didn’t pay much attention to the exposure and white balance.  However, my purpose for taking this photo was to show is seen by looking out the window that appears in the photo above.  Now, is this not wonderful sight to look upon when you come into this place or what?

I may have mentioned in a previous post following an earlier visit to the Heart Six Guest Ranch that the current owners are still using the same dining furniture we used in the 1960’s when I worked there.
Our plan had been to work through the month of October and possibly a bit into November.  However, the government shutdown worked against those plans.  On October 1, Connie and I were working as the on duty hosts.  We had the misfortune of being the ones to inform all our campers that the park was closed and then offer them their options.  Fortunately, Rick and Donna jumped in and helped us with that rather daunting task.  Rick and I cruised through the campground talking to everyone present and making notes of who had and had not been informed.  By day’s end we had talked to all but a very few campers and most had made preparations to leave.  There were a few who were much less than happy and at least one who essentially shot the messenger.  We survived the forced exodus and all three of the camp host couples were afforded the opportunity to stay or leave as we saw fit.  If we stayed we were restricted to the campground, the post office, the medical clinic, the one general store which remained open for awhile and the North Entrance.  We were not allowed to recreate.  At first it was sort of fun, but then it snowed.

I am not talking about a little dusting of snow.  We had about a foot in the campground and it was cold.

We were not too sure we wanted to stay once the snow had fallen, but we were also darned sure we didn’t want to drive the motorhome in this stuff either.

We decided to make the best of it.  We had a few campfires.  We went into Gardiner for dinner several nights, but we were noticing that many of the restaurants were starting to close earlier than advertised due to lack of business from the park being closed.  That is they were closing early for the season!

One day we did have a grizzly bear join us in the campground.  Now, the following photos were not taken while recreating, as we were forbidden from such activities.  Think of these images as being scientific research or some such thing.

The rangers were trying to haze this young grizzly away from the developed areas.  He or she wasn’t paying much attention to them.  It was fun to watch.  At this point, the bear was across the highway from the campground.

This is a sample of his/her paw prints within the campground.

This one is really neat because you can actually see where the bear’s long claws strafed the snow as he/she walked along boardwalk at the bath house directly behind our motorhome.
Well, after about ten days of no visitors and little to no progress in Congress, we all decided it was time to move on to warmer climes.  Within two days we were all gone.  Connie and I returned to Kyle with stops in Sheridan, Wyoming and Kersey, Colorado to visit my family.  Shortly after returning to Texas we flew to Pittsburgh to visit Connie’s family.  In December we found ourselves back in Colorado to spend some time helping my sister recover from a medical procedure and the loss of her husband from cancer.
Christmas and the new year were celebrated at home.  Since then we have been making plans for the spring and summer as well as keeping the Austin area economy booming as we continue to decorate our home.  We have also been experimenting in our kitchen and have found that we do know how to cook from scratch.  I bought a new cappuccino machine and am now making lattes and cappuccinos which rival the best of the Starbucks baristas.
This brings to an end this test.  I would appreciate any and all feedback concerning the new look or anything else you care to comment on.  Either e-mail your comments to me if you got the notification of this post via e-mail, or utilize the comment option within the blog.
PrevOlder Stories
Newer StoriesNext