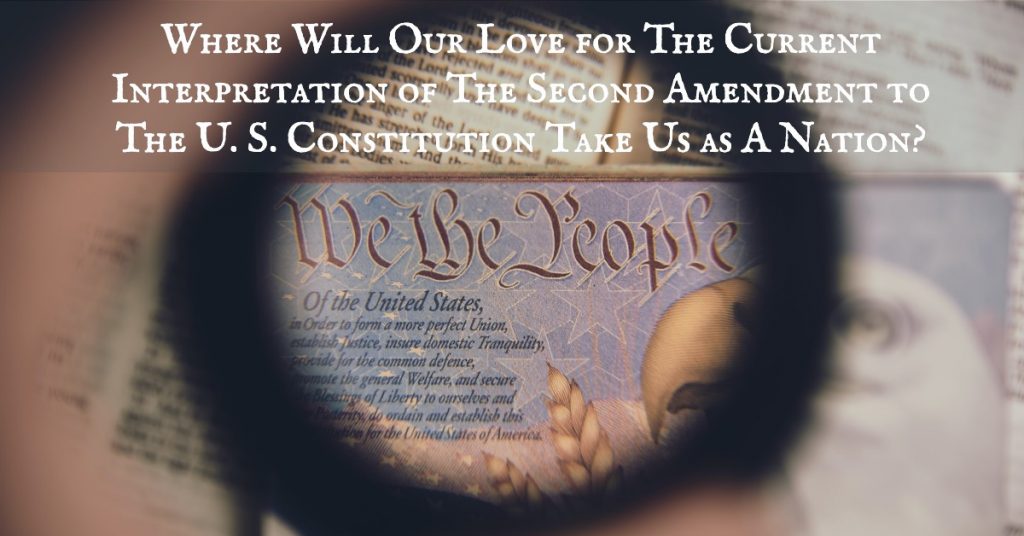 Where Will Our Love for The Current Interpretation of The Second Amendment to The U. S. Constitution Take Us as A Nation?

While attending a Labor Day weekend potluck dinner in the neighborhood I found myself in a discussion regarding school safety and the seemingly endless stream of mass shootings around the country. More about that discussion will follow.

On the news that same evening I watched the President saying that background checks would not have prevented any of the recent mass shootings. As has been his habit following each such event, he blamed the problem on mental illness. He was not completely wrong in this assertion.  Nor was his assessment a full and complete bounding of this national tragedy.

Today, I read an interesting and very telling article in the Washington Post that described in very great detail what a small school district in Ohio has put in place to protect the children of the community from an “active shooter” who may someday make his/her/their way onto one of the three school campuses. The article nearly sickened me. The link that follows goes to that Washington Post article. https://www.washingtonpost.com/national/you-understand-that-you-might-have-to-shoot-a-student/2019/09/03/2d37b8c2-c90c-11e9-be05-f76ac4ec618c_story.html

On the NBC Nightly News this evening I learned of another school district where a new high school is under construction. The design of that school is intended to minimize the damage an “active shooter” would be able to inflict on the students and staff. My stomach turned some more. Here is a link to that story. https://www.nbcnews.com/nightly-news/video/this-michigan-high-school-is-being-built-to-deter-active-shooters-68110405962

Also, on this evening’s news, I learned that the shooter in the Midland/Odessa mass shooting failed a background check while attempting to purchase a firearm from a dealer due to a documented mental health issue. At some point, he purchased an AR-style rifle from a private seller circumventing the background check requirement. Were the universal background checks applicable to private sales as proposed in legislation sitting on the Senate Majority Leader’s desk, it is less likely this mass shooting would have happened.

Texas Governor Gregg Abbott has said he is fed up and will act. He has put together a Domestic Terrorism Task Force as a first step toward taking some sort of action. How long will it take and how far is he willing to go?

It is not so much my intention to debate the Second Amendment to the US Constitution, but rather to add my voice to the argument that the current interpretation of the amendment is contributing in a major and negative way to our individual right to life. Let’s be clear here, I am talking about the right of people living ex-utero who breath air. This is not a discussion of the rights of the unborn even though they too are negatively affected by the lack of political will to fix this problem.

Let me step back to that potluck discussion of this past Sunday. One of the people involved in the discussion is a local teacher. She is in favor of putting guns in the hands of some adults in the school. While she stopped short of saying she felt teachers should be armed, she did try to convince me she would feel comfortable protecting her home with a gun.

My teacher acquaintance lives in her home with two children under the age of six as well as two other adults. She assured me that to prevent an accidental discharge of the weapon, it would have to be stored unloaded in the home. She felt she could load, aim and fire in time to stop a home invader. I had a few questions but did not get past the first which was when was the last time she had been to a range and fired her weapon. The answer was not since moving to Texas from Florida some six years ago. My other questions were no longer needed.

As the discussion continued, it was made clear that the apparent single way to stop the violence is to meet it with more violence. In fact, the Department of Justice is looking at ways to expedite executions of people who are convicted in mass shooting cases. Now there is a non-common-sense approach to the problem. Although the debate seems to continue regarding whether harsh sentences up to and including execution are an effective deterrence to violent crime, I believe the great numbers of incarcerated Americans indicate the deterrence is not strong. Besides, the current counter-argument to improved gun regulations is that the shooters are mentally ill. So, does that equate to jail or death to all persons who suffer from mental illness?

The discussion continued, and soon we had a fence around the schools, bulletproof windows, armed law enforcement at a minimum in the buildings, and metal detectors at the entrances. One person who was arguing in favor of all the above then rolled out the latest tactic active shooters have employed. That being the activation of a fire alarm in order to move students and staff outside, so they are easier targets. My jaw fell open at that statement as he had just neutralized the entire argument he and others had been making. There was no sense in continuing the discussion. We had tipped toward nonsense.

I recognize that I grew up in much safer times, but I find these barbaric methods of an attempt to protect students to be simplistic, expensive and completely ineffective. I must wonder what will be the longstanding effects of these policies and practices on the psyche of the very same humans we are attempting or pretending to protect? and/or administrators only attempt to solve a part of the much larger issue.  Mass shootings are not occurring only in schools.  Walmart, concert venues, roadways, and churches are examples of how this social disease has spread.

In my opinion, there two facts we must aggressively address. First, and in my mind, the more important one is the availability of weapons of war in the hands of unqualified persons. I will not try to classify these weapons down to a specific type, style, configuration or supposed intended purpose. Those determinations need to be made, but my personal knowledge of weapons is too limited for me to be able to compile a list of attributes that should be considered. The second is the mental illness issue that virtually all states and the federal government gave up on trying to solve several decades ago. That must change. However, you cannot fix one and think the problem will be resolved.
I would like to point out that mental health issues exist in all societies around the world. There seems to be a very small number of societies where mass shootings are a near-daily occurrence.

Keeping guns out of the hands of those who should not have them is complicated. Enacting a set of laws that would be effective in achieving such an honorable goal would likely prevent some good people from being able to own guns.

I submit there are few laws in the world that do not have a negative impact on some portion of the population. Think about this logically, had we no traffic laws, or at least a very limited number of traffic laws how many more of our citizens would die on the roads each year? Yet, there are likely many drivers who could be safe driving much faster than the posted speed limit. If there were no laws and regulations governing the construction industry how many citizens would die from failed infrastructure each year? In fact, the evolution of building codes in this country has had a very positive effect on the stability of buildings in earthquake-prone parts of the country as an example. Those laws make constructing buildings more expensive and that fact certainly negatively affects one’s ability to buy or lease.

I believe the number of honest, mentally healthy would-be gun owners who would be denied the opportunity to own guns would be insignificant to the number of lives that would not be put in peril.  I also believe that while cannot return to the world I grew up in, we can bring down the temperature around the country by removing guns from those who should not have them whether for mental health reasons or personal behavior reasons.

My title for this piece suggests that there was once a different interpretation of the Second Amendment. Prior to the rise of the National Rifle Association as a gun lobby instead of a gun safety organization, there was common agreement that there should be personal limits on gun ownership. After first saying that improving background checks is a good idea, President Trump stated that tightening the gun laws, including background checks, would start us down a slippery slope. That statement came after the President had a phone conversation with NRA leadership. I suggest that we are well on the way down a completely different and much more slippery slope.

5 thoughts on “Where Will Our Love for The Current Interpretation of The Second Amendment to The U. S. Constitution Take Us as A Nation?”