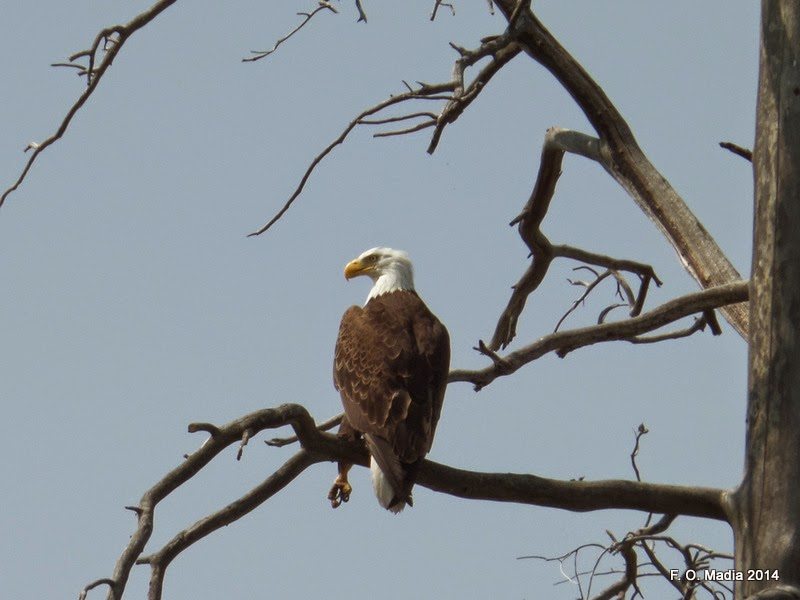 I think I may have hinted that this next post was to feature many of the wildflowers that have adorned the park over the last two months.  However, we had a rather interesting bear sighting the other day that I must talk about while the details are fresh.  So, wildflowers or bears?  I had to go with the bears.

From time to time we have groups who use the Superintendent’s Camp which, while not part of Indian Creek Campground, is still within our Ranger’s area of responsibility.  This past Friday we had a group of YMCA volunteers from Illinois using the camp for one night.  Among other things this group was to do some work for the Pica Research Team.

Generally when we have groups using this remote site the Indian Creek Campground hosts visit the site once in a while to make sure proper food safety precautions are taken and that the camp is being kept safe from bears and fire.

When this group from the YMCA left on Saturday morning I was heading down to the camp on the golf cart we use in the campground.  I am always on high alert as I make the near one mile journey down this little- used track as there is always something of interest to see.  On this particular day I spotted two Bald Eagles perched on a dead tree.  I stopped the cart as soon as I was able to identify them as eagles and snapped a few pictures with my point and shoot camera which is with me at all times.  After getting the photos I moved forward halving my distance to the tree where I stopped for more photos.  After a second move forward I decided that I needed to move to my east to get the sun in a better location for better images.  So, I got off the golf cart and moved down a short hill where I could get a better angle.

After snapping a couple more pictures I heard a commotion to my left.  There was a Raven making a ruckus, but something much bigger was also moving.

As I looked away from the tree with the eagles I saw a grizzly bear making a retreat to the east.  I didn’t see exactly where he had come from, but I was pretty sure it wasn’t that far from where I had been standing.  As I watched the bear I was able to grab one quick photo before starting my own retreat to the golf cart.

As a reminder, in our volunteer job we expend a great amount of energy reminding visitors to remain at a safe distance from wildlife.  For bears that distance is 100 yards.  We also talk at length about what to do should one have a surprise encounter with a bear in order to avoid an attack.  When I saw this rather large fellow or gal making way away from me I was only mildly surprised as that is what I tell visitors will usually happen.  However, what happened next didn’t exactly follow the script.  As I sat on the golf cart contemplating my next move the creature came charging back in my general direction.  Before I could react he stopped at the edge of the creek.  He was actually at a bend in the creek and the bank had hidden him from my view as I was making my way along the track to the camp.  That is the spot he returned to following his rather hasty retreat.
I pulled the cart a bit closer.  I know, I was going the wrong way, but I wanted to see what was so interesting that the bear didn’t care that we were as close together as we were.

I called Connie on the radio and told her where I was and what I had encountered.  As it turned out our Ranger had just arrived as part of his daily routine, so Connie briefed him and he started making his way towards me.  I took some more photos while I waited.

When Ranger Bush arrived we both observed the bear’s behavior for several more seconds before he instructed me to return to Indian Creek Campground and get some “Area Closed” signs and start posting the perimeter of the area so an unsuspecting fisherman or hiker wouldn’t wander into the area.
Before I left, and with the ranger vehicle as a shield, I got a little closer for one more round of quick photos.

I did as instructed and posted the north boundary of the scene well out of view of the animals.  This meant placing a sign across the footpath that branches off a very popular back country trail that has its trail-head near our campground.  I also walked that now closed trail towards where the bear was feasting to make sure there were no other humans who may have made their way via the trail.  Ranger Bush had placed a second sign much closer to the Superintendent’s Camp and had instructed me to terminate my trail clearing walk at that point.  Later in the morning the good folks from Bear Management came out and completed posting the perimeter.

In our four years working here I have been close to bears on several occasions.  Usually I have purposely placed myself between visitors and the bear to keep the visitor from getting injured.  I have always been fully aware of the situation and felt in control of my actions.  This sighting was way different.  Even though I was being my normal very careful self and trying to be alert to my surroundings, this bear surprised me.  And even though I have on occasion been closer to bears than I was to this one, I was none the less quite frightened. My respect and appreciation for these wonderful animals has been enhanced by this event.  My speech to visitors now has even more meaning than before.
All that said, my appetite for better photos has only been whetted by this experience.  The hunt will continue.
For the flower lovers among you, here is a tease from my yet to be written next post.

Stay tuned.  I hope to identify all my flower photos during our next work rotation and then get the blog article posted.

2 thoughts on “Wildflowers or Bears?”